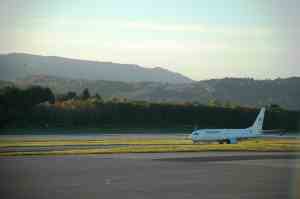 Bergen airport is the second largest airport in Norway and the main airport for the west coast. The excisting terminal was originally built for 2.8 million passengers, but has since then undergone extensions and adaptations to the current security culture. Over the last 10 years the airport has seen traffic grow by an average of 6 % per year, and today it serves more than 6 million passengers a year.

As a result of this the terminal at Bergen airport has limited capacity for several central functions.  Efforts to evaluate how one could solve future capacity challenges started back in 2008 and continued with an international architectural competition in 2009. The winning draft was a new and flexible airport terminal which could be connected to the existing terminal. Project- and project-planning management:
Sweco AS

Architcts and consultants:
Nordic - Nordic Office of Architecture (NSW) COWI AS Team_T3 AS
Norconsult AS
Aas/Jakobsen
Cowi AS
Ingeniør Per Rasmussen AS

Construction Management:
HR Prosjekt AS, Stema AS, Erstad & Lekven AS